You are here: Home / Ketosis and Pregnancy Toxemia in Goats 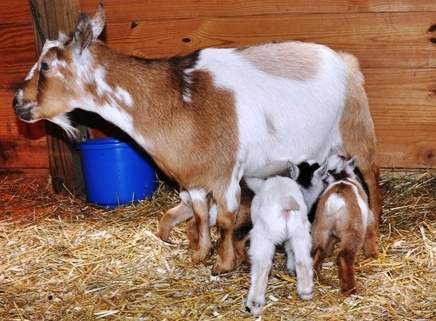 Ketosis and Pregnancy Toxemia in Goats

What are pregnancy toxemia and ketosis in goats?

Pregnancy toxemia and ketosis in goats are potentially deadly diseases that occur during late gestation and early lactation. These diseases are often (though not exclusively) seen in dairy goats, especially in good milkers. The situation occurs either very near the end of pregnancy (pregnancy toxemia) or after birth, when the goat begins milking (ketosis).

The problem is that late-term pregnancy and especially the onset of lactation require considerable energy, more than can be derived from the feed. The condition is compounded in a doe carrying multiple fetuses, because the kids compress the rumen and the doe simply cannot physically eat very much.

Consequently, the goat must call on body reserves of fat for energy. The breakdown of large amounts of fat results in compounds called ketones floating around in the blood. In large concentrations, these ketones actually have a toxic effect; the animal may develop acidosis of the blood (goat blood, like human blood, should be slightly alkaline), and if this becomes severe enough, the goat may go into a coma.

Early symptoms include apathy, poor appetite, a decrease in milk production (if the goat is milking), a rough hair coat, and disorientation. You will need a veterinarian to administer glucose and electrolytes immediately, as the condition can easily result in the death of the goat.

How to manage ketosis or pregnancy toxemia in goats

To address ketosis or pregnancy toxemia in goats, you must get more energy into the late-term pregnant and early-lactation doe. Gradually increase the concentrate (grain) portion of the diet and reduce the hay portion (remember, you don’t want to change the rumen pH too fast). The grain is much higher in energy and will take up much less room in the rumen. A small amount of fat (such as corn oil) on the feed will also help increase energy intake. Feeding some of the forage in pelleted form will help to maintain dietary fiber levels in a smaller volume of feed. Providing more frequent and smaller meals will also help. Some people give their does a little honey or molasses right after they give birth to provide some immediate carbohydrate energy. Remember to consult with your veterinarian before administering this type of a feeding program.

Keep good records so that you know which does are prone to ketosis or pregnancy toxemia, as some does sail through pregnancy and lactation without problems and might actually get fat if given extra energy in their feed.