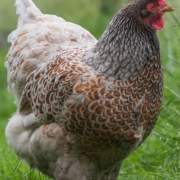 Barnevelders are a medium heavy breed of bird named after the Dutch town of Barneveld. They were created just before the First World War in the search for a bird that was a good layer of dark brown eggs.  Affectionately referred to as “Barneys”, they are hardy birds and good foragers.  The Barney’s are known for their good laying habits with an annual production rate of 180 -230 eggs. They are also known as dual purpose birds weighing in at 6-7lbs at maturity.

New this year at Burns Feed Store is the Blue Laced Barnevelder, a variety of the standard type of Barney where the black in the lacing of the feathers is replaced with blue. It is relatively rare as blue birds do not always breed true.

Sign up now for your “Blue Barney”! They are scheduled to be arriving at BFS the following weeks of:

At this time the Blue Laced Barnevelder’s are not sexed at the hatchery and are only available to sell as Straight Run.